First of all I must warn all readers. This is not a happy blogpost. It is not funny. It is a dark and sobering tale of lessons that we should have learnt in the Netherlands. A tale about lessons that we never learnt. Lessons that still hold immense value today. Lessons that we owe it to be taken to heart when we reflect on the 75 years of freedom that we will celebrate next week.

From Rotterdam to Amsterdam: records and track records

This post connects two cities that I lived in for the longest time in my life. First of all; Rotterdam, the place of my birth. It was bombed to ashes early on in WorldWar 2. Except for one place: the city hall. Reason being? That’s where the population records were. Cunning Germans, as my dad explained to me.

Next up is Amsterdam, where the Anne Frank house and her statue form the background against which new children grow up in freedom. Where Stolpersteine remind us of those who lived here before us. Where the elder lady with her dog told us what is was like to grow up here. How the Germans were raiding the houses and pushing their bajonets into the ceilings to discover if people were hiding.

Amsterdam is the city of the ‘dot-map’. It is the map that the Amsterdam city administration drew up on request of the occupying Germans, that wanted to know: where do the jewish people live?

It sounds like a simple question: an administrative thing, strange request perhaps, but why not just answer it? Let’s cooperate collaborate. So the map says: One dot is 10 jews. Take it in and look history in the face.

The particular situation here in the Netherlands (J.H.Blom – source) was that our government had fled and the Germans put their officials in charge of the Dutch civil servants. This is a marked contrast with Denmark, where they let the Germans enter with the military but stayed in office and controlled their bureaucracy.

There is a lot more to read in the study of Blom but one of the very striking elements is the efficient bureaucracy in the Netherlands, in combination with a tendency to cooperate and answer properly to Authority. Whichever the source of Authority.

The very sad fact of the matter is that after the war we could learn that in Western Europe, the Netherlands turned out to be the country where 75% of its Jewish population died, as compared to 40% in Norway and Belgium, 25% in France and almost 0% in Denmark.

If we look history in the ugly eye, this is (literally) a track record that the Dutch must carry as a scar on and in their souls. A fact that obliges us to honour the deceased and make sure that we learnt something. But do we really?

History is distant and can be easily forgotten
This is all maps and statistics from earlier days. If we wish we can look away and forget. So let me warn you as I bring the lesson closer to home. To this end I draw on a pre-Corona visit that I paid to the excellent exposition covering 300 years of insurer Stad Rotterdam. now ASR. During the visit I stopped by and looked at the part on World War II, where I bumped into someone who turned out to have contributed to that part of the exposition.

He is a commited lawyer who until today still tries to resolve the administrative wrongdoings of the past. His story on what he found in archives, on what he did not find, was very sobering. He had seen files where a fanatic anti-semite employee hammered a J multiple times on the insurance policies of Jewish clients. And he explained how the Germans would start out with simple requests with more serious consequences kicking in later.

A typical example of this is the introduction of a generic duty to register and issue personal ID-s. This was formally introduced in October 1940 in the Netherlands and came info effect in April 1941. And then, one year later, all IDs of Jewish people needed to be stamped with a J. So we see bureaucratic evil of the end made possible by fairly innocent baby steps in the beginning.

Administrative witnesses of the insurance sector: during the World War 2
One of the most well known German tricks pulled in World War 2 in Amsterdam was the take over and manipulation of the Lippman Rosenthal brand by setting up a sort of second bank or branch-office with the same name. This second office was effectively German run and a ‘robbery-bank’ that sold off assets of Jewish clients. This bank plays a sinister role in the documents that I will be publishing here.

It started out with a request that Jewish people declare to their bank that they are Jewish, as via a specific Regulation, the only bank paying out the life insurances would be the Li-Ro-robbery bank. Here’s the snapshot of the regulation and the form to be filled in.

And here is the form and letter that people were sent. Please declare yourself to be Jewish.

Now the involved insurers didn’t really all like this idea and they figured out: if we don’t know for certain if someone is deceased, we can’t really transfer all the money to Li-Ro bank. So the exposition shows a bank writing to the Li-Ro bank on this specific issue.

Now beware of the answer which dates to January 1943.  I will translate it here:

Through the contact that we have with the relevant authorities we have been informed that Jewish people that have been deported by government order will be totally taken out of the society and nothing will be ever possibly heard of them. As a result they are, sort of automatically, also completely annihilated in respect to your administration but we note that, if no further measures are taken, their remaining insurances would continue to exist.

It will be clear to you that the circumstances in which the aforementioned Jewish people find themselves in society – but with respect to you as well – have lead to a situation that is equal to that where an insurance policy ends due to the death of the insured, which means that we need to find a way to bring those insurance to a pay-out.

We invite you, the pay to us the relevant reserves that you have amassed to this end, while deducting a considerable reward for the risks that you have taken.We look forward to your proposal.

Administrative witnesses: after the war
Imagine that you survived this World War 2. And that you want to claim the insurance funds that you are entitled to. And the response being: please can you prove that the person you are referring to is actually dead? Survivors of the war atrocities had to endure long and terrible administrative procedures to restore their rights.

Here is a witness that matters. It is a letter dating from 1950 and it is a declaration by a Red Cross official. It specifies the dates of deportation as well as the names of three survivors who have had to make a personal declaration to the Red Cross. It says that

… it is clear from the declaration of those three people (out of 33.000 deported to Sobibor), who stayed of a longer period in time in the camp, that almost all people that came to Sobibor were almost immediately being suffocated by gas and cremated afterwards. Given that nothing has ever been heard since the conclusion is that the person in question has died on 11-6-1943 of the consequence of suffocation.

Survivors had to fight administrative wars and it took until 1999 before some sort of settlement was made between representatives of the Jewish community and the Dutch Insurance Industry. Part of the settlement is that a Foundation for individual claims SJOA has been set up. And until today the foundation is still actively assisting and doing research to do justice.

Which brings me full square back to my neighbourhood in Amsterdam. There are not just the silent physical reminders of history, the Stolpersteine in the streets. We also find reminders on the web, in this list of holders of insurance premiums. If I type in the names of the streets around me, their names come back to help me remember what happened.

Three lessons to heed…
We, society in general but the Dutch in particular, owe it to all of those who gave their lives during the war, hoping for true freedom, to heed three lessons we appear to have never really learnt:

1- we must better understand the mechanics, the workings of records, administrations and bureaucracies and the ease with which what looks like a legitimate government action can turn into an evil one that starts a persecution on illegitimate grounds,

2- we must remember that it is the atrocities of World War 2 that made us formulate the Human Rights Declaration, which formulates the fundamental rights that protect us,

3- we must cherish and protect our fundamental right to privacy as one of the most important defenses against bureaucracies turning evil.

About lecture series ‘Money, Trust and Control’
How many currencies do you hold in your wallet, electronic or otherwise? And do you actually regard cryptocoins as money? A decade after the birth of the Bitcoin, we delve into the world of money – a world that seems to be on the move. We start by investigating the very nature of money, taking a historical perspective. This sets the scene for discussing what is happening today, and what we can expect in the future. Explore how societal developments and technical innovations challenge the way in which money is created and used, and what they foreshadow for the way we will transact in the future. Will alternative currencies overturn the existing monetary system? And what about the effect of these innovations beyond the monetary system, for instance on food chains? Travel from the past, through the present, to the future of money, and discover what trust, control and legitimacy have to do with it.

Click here for the English version of this page. 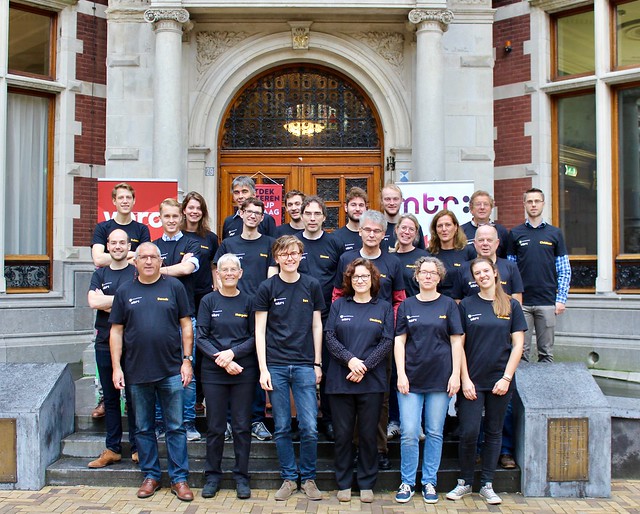 Finding #blockchain in the historical streets of Amsterdam with @BlockchainIC! pic.twitter.com/YEnlvnDVlf